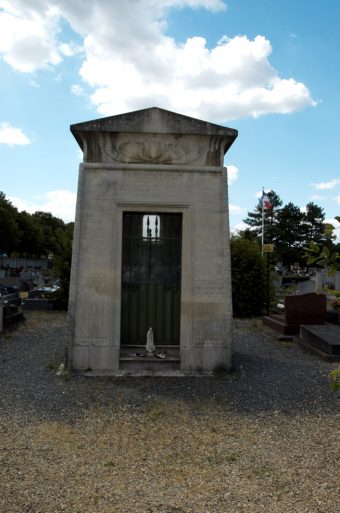 It is not a coincidence that the architecture is that of Egyptian monuments. General Donzelot was very familiar with Egypt, undoubtedly his most glorious campaign and his title to glory for all eternity. His name is engraved on the door of the large temple of Isis in Philae, close to the first Cataract of the Nile,  the extreme tip of which was reached by the Desaix brigade, charged with following the Mamelouks after the battle of the pyramids.

The high monument on the tomb of François-Xavier Donzelot (1764-1843) at the Neuilly-sur-Marne cemetery, dominates the central walkway.

The tomb is turned towards Ville-Evrard and the rising sun, and does not face the main entrance of the cemetery.

The key stages in the General’s career are engraved along the length of the two columns which support the pediment, in Egyptian style: the Battle of Valmy in 1792 and that of Waterloo in 1815. On the pediment, the solar discus of the god Ra is flanked by two serpents which traditionally accompanied him and which are the attributes of the Pharaoh, the son of the Sun.

These decorations are memories of the campaign in Egypt in which Donzelot participated between 178 and 1802.