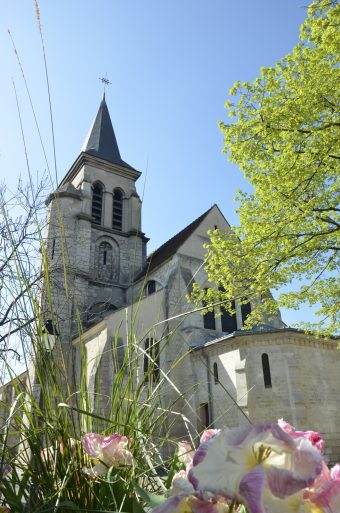 When it was built, archaeological excavations were carried out by the local authority to remove the two aedicula outside the building which housed the heating and part of the sacristy. This process uncovered several graves of bodies buried in caskets with decorations which are undoubtedly from the Merovingian period (contemporary with Queen Bathilde in the 8th century).

The burial suggests that Christian rites were known and we can therefore trace back to this time both the location of the “chapel” and the early “church” and the Christian community.

In his book, the History of the Diocese of Paris (1752), Father Lebeuf suggested that the name of the Saint Baudile Church that he had visited may precede its construction. Jacques de Vitry spoke of a “ruined church” at the time of Foulques, which this priest had destroyed, promising his faithful to rebuild it. But no more can be assumed, other than to say that documents from that time mention around thirty “fires” (meaning families or households) living in Neuilly.

The sarcophagi (almost certainly made from Avron plaster) which were exhumed are currently being analysed in the regional archaeology department in Epinay sur Seine.

Foulques’ tombstone was removed from in front the high altar which obstructed the services, by the priest François Campigny (around 1775) and it was replaced by a domed slab. Only an engraving accompanying the publication by Lebeuf is left to illustrate the very comprehensive description he gave of it. In 1900, the priest Jean-Baptiste Charasson installed a mosaic to decorate the porch tympanum, replaced a painting on the same subject of the “Blessing Christ” as did the tiling in the church, which covered the tombs of the clergy who were buried inside the building. They included not only former priests but also Parisians such as the canon Pierre, nicknamed “Bread-and-Flesh” for his devotion to the Eucharist, and who was one of the last to have been buried in this way. According to Foulques, it is said that the cattle which brought his body from Paris to Neuilly made their way unguided, before stopping in front of the church porch.

A few bone fragments were collected by the abbot Charasson, and can be seen on the lower left. But if there were any engravings on the domed slab, none remain.

The cemetery was originally located around the church. When the population began to grow, it had to be transferred around 1865 to its current location, then in open countryside, on the lands donated by the heirs of General Donzelot. The holy land around the church stopped receiving the bodies of the faithful and hosted a market until 1932.