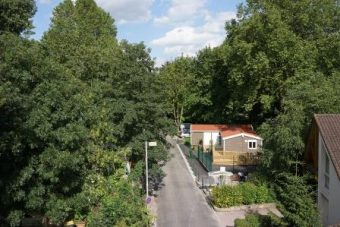 The Haute-Île municipal campsite is one of the rare campsites in the Île-de-France which is close to the centre of Paris. It is situated half-an-hour from the heart of Paris, by car or public transport.

This ease of access to the major Parisian tourist sights and to Disneyland, makes this a very popular campsite with foreign and local tourists and for families, groups and young people. It has up to 150 pitches and is also equipped with a Euro-Relais service point for motorhomes. The campsite extends over approximately two green hectares with, to the north, the little island in the Canal de Chelles and, to the south, the River Marne. The towpath which runs alongside the campsite leads to the Haute-Île park, classified as a Natura 200 site.

Neuilly-sur-Marne is accessible via major road networks (the A4 and the A86) and by public transport on the RER A train line and several bus lines. The town has cycle lanes and has a good quality of life, close to the river which keeps pace with the runners and walkers who stroll along its banks. Featuring many “guinguettes” or open-air, riverside cafés in the Bords de Marne tradition, the watersports base at the entrance to the campsite is a regular stopping off point for fans of a number of activities which mark the sporting and cultural calendar throughout the year.

The municipal Haute-Île campsite at Neuilly-sur-Marne is open from 1 April to 30 September.

Reservations are recommended between 15 June and 15 August and when there are major events or trade fairs in the department of Seine-Saint-Denis or the surrounding areas (the aeronautical fair, the Bourget recreational vehicles fair, etc.).

The only campsite in Seine-Saint-Denis to offer “bare” pitches measuring around 20m2 for family tents or 2/3 people (inexpensive accommodation which is ideal for young people).

The pitches are situated at the start of the campsite, close to the toilet block but also at the bottom of the site for those seeking a more “wild camping” experience or a calmer setting.

Pitches for caravans and motorhomes

There are also pitches set aside for caravans and motorhomes

These 20m2 pitches are surrounded by hedges and are equipped with 10 amp electrical terminals (long extension leads and H07RNF standard adapters required).

For motorhomes, the campsite is equipped with a Euro-Relais service point.

This is a sanitary facility equipped with a multi-function service point enabling motorhomes to empty their grey water (cooking and washing water) and black water (toilet) and to fill up with fresh water. It also provides an electrical supply.

Campers must pay a daily fee, to which any supplements are added.

BASIC FIXED FEE PER NIGHT – the pitch can accommodate a maximum of six people.

Supplementary fees in addition to the basic rate

A 10% discount will be given to members of the Fédération Française de Camping et de Caravaning on the total cost of their stay; upon presentation of their valid membership card.

For contracts for storage of unoccupied vehicles and groups of more than 10 people and companies, please contact the tourist service on + 33 (0) 1.43.08.21.21 or service.tourisme@neuillysurmarne.fr.

From Paris (porte de Bercy) the A4 motorway, direction Metz-Nancy.

Arrival by the RN 370, turn right as soon as you cross the River Marne.

Cross the bridge above the Chelles canal lock, the entrance to the campsite is on the left just after the restaurant. On the right is the marina.

The carpark on the left includes spaces for vehicles with caravans, motorhomes, etc. for temporary parking.

From the south (A6) towards the A86 motorway direction Mets-Nancy.

Then the A4 direction Metz-Nancy-Marne-la-Vallée, exit Noisy-le-Grand, direction Chelles then Neuilly-sur-Marne, arrive from the RN 370, turn right as soon as you cross the River Marne.

Take the RER A train line direction Marne la Vallée – get off at the Neuilly-Plaisance station. Take bus number 113 or 203 and get off at Place de la Résistance – Foch De Gaulle.

The campsite is open to the public from 4 april to 30 September.